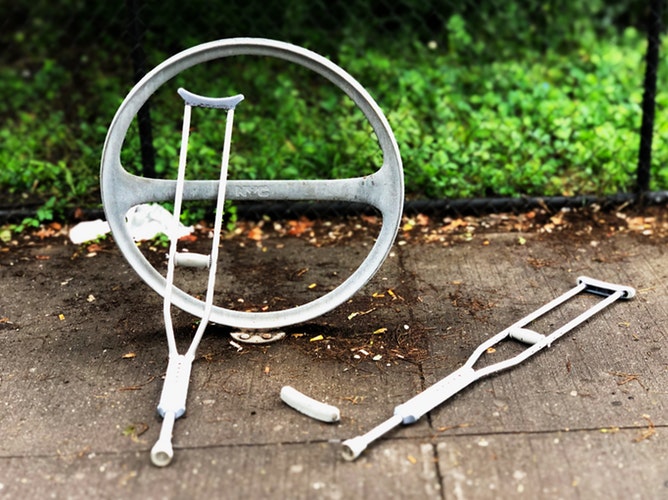 I’ve told most parts of this ‘accident story’ countless times, but I desire to preserve the memory of the actual incident here, quite in detail, no matter how traumatic. Perhaps, I’m doing a desensitization, or I just don’t want its lessons to disintegrate with time. Here it goes.

I woke differently that Saturday morning. I was motivated like never before. I finally began writing Kuya Rey’s story (a storyteller I interviewed months ago), and at 11 AM, left the article midway and promised to finish it in the evening.

At past 12 PM, I was ready for Jason Evert’s chastity talk. My friend-numerary offered me free tickets for it and asked if I can come to their center to get them. “Anak, mag-ingat ka ah? (Be careful, ok?)” Papa said. I said yes, and kissed my parents goodbye.

I walked half the block and got to the two-lane street in less than a minute. I found the jeep I needed, Padre Faura, parked on the other side. I didn’t try to cross the street though since I saw a Guadalupe jeep, which I didn’t need, coming. It passed in front of me, pulling over as if saying hop on. Another jeep came in tow, yet leaving me an amply-wide path to tread in between.

I stood between the two jeepneys, looking left and right. My periphery told me that the jeep at my left (the one that was in tow) was at a halt, so I made a step forward, certain that the street was clear and safe to cross.

Then everything went hazy.

I was living in my head. Everything was a silent whirl. No image, no sensation. I thought, Maybe, I got hit. I had no idea how and who hit me, though. I also remembered the beginning of the book Me Before You that described how Will felt when a motorcycle crashed against him. I then understood that part better.

Suddenly, a whit of reality came to me as I recognized a huge thing moving above me, a shade of black that told me I was underneath something. I didn’t dare move, for I was aching all over.

I waited for that wheel to run over my head. I thought, Maybe it’s why my life has been confusing lately. I am meant to die young. I thought I might go to purgatory since I wasn’t that kind and loving, and knew that slipping to “the other side” would feel the same as I felt when I was living in my head. I accepted death then and there.

I anticipated the weight of the tire to crush me and wished it would be fast and not as painful. “Oooouuuccchhh!” I shouted in advance as I sensed the wheel nearing. It, however, whirred some inches away from the top of my head. The sun found me. I was safe.

I lay on the asphalt, unstirring. Frozen, relieved. People crowded over me.

“Nag-overtake kasi iyong jeep eh! (The jeepney did an overtake!)” a man said.

“Saan masakit sayo? (Where does it hurt?)” a woman asked.

My left lower leg throbbed in pain. My right lower leg was…useless. I craned my neck to check it, hoping it was still there. It was. It didn’t look as if it was run over either. How broken it was, I couldn’t say though. Lord, please help me recover from this with complete limbs. No amputation. Please.

The others chimed in Don’t move her lest the bones might get broken ‘further’. The woman brought my bag to me, saying I should keep my things close.

Unsure about giving my name, I just said I’ll call my parents. Someone found my eyeglasses and hung it loosely on my nose. I fumbled for my phone, and ticked my parents and aunt’s number on the Contacts. Nobody was answering. It was lunch time, everybody was probably eating. Oh, Jesus. Please, help me.

Somebody confirmed the address and went off. At a corner, I saw a policeman scribbling while throwing curses at a young man who happened to be the jeepney driver who hit me. He seemed sorry and pale, out of fear perhaps. Instead of getting mad at him, I felt…pity, while street children across the street sat on the ledge of the walkway, looking at me with the same pity.

Papa found me a couple of minutes after. His face was a calm amidst the unrest. “Okay ka lang, anak, (You’re okay, Elaine)” he assured.

My uncle followed, asked if I was fine. His face was concerned, enraged.

“Ambilis bilis mo kasi magpatakbo! (You were driving too fast!)” he told the driver.

The policeman called an ambulance, said it would take long before it gets there. Papa looked calm but was probably at his wits’ end.

Suddenly, an ambulance came ambling at the intersection. People signaled for it to stop, which it did. The ambulance team placed me on the pat slide, heaved me into the vehicle, and rushed to the hospital. Papa hopped in too, whilst my uncle went off with the policeman and the driver.

In the hospital, they cut my tattered pants and assessed me all over. My elbows were lacerated and swollen, as well as my knees and right foot. X-rays showed fracture in my right ankle, torn tissues, and a crack at the distal portion of my tibia. I was operated on. They burrowed screws into my bones to keep them in place.

The doctors and nurses took good care of me. I was basically bedridden, even my pee had to go into the bedpan. My family, relatives, and friends visited me, fed me, looked after me. I also saw who among my friends were real friends, who really cared, who truly loved me. God showed me how valued I was, so much that I can never question it again. I was all grateful that I forgot the pain, the trauma, and the fear. Weird, I had not a proper bath for days while in the hospital, but my face looked clearer than before.

Elsewhere, witnesses told the police that I rolled under the jeep. They couldn’t imagine how it all happened, how I wasn’t run over. Even my bag was in good condition (save for the folds in the pages of Finding You that was in my bag). My eyeglasses got a tiny scratch, that’s it.

They say this is my “second life”. Maybe, they’re right. But I don’t feel like counting lives. I’d rather count the miracles this one life has. Don’t get me wrong. I don’t want this accident to happen to me again, or to anyone! My point is, how blessed am I? That Saturday, I didn’t just witness a miracle. I experienced it.

7 thoughts on “A Vehicle Crash to Remember”